Advice from a Volcano: “Stay active; keep your inner fire burning; it’s ok to let off steam; go with the flow; be uplifting; it’s all a matter of time; have a blast!” ~ Ilan Shamir

After living in Yellowstone National Park for two years, I became fascinated with the powerful forces of nature at work below the Earth’s surface, so it was not surprising that I was drawn to the “lava-strewn” landscape of Lassen Volcanic National Park.

All rocks found in this park originated from volcanoes and all four types of volcanoes can be found here: shield, cinder cone, composite, and plug dome.   The main peak in the park is 10,463’ Lassen Peak, a plug dome volcano, formed when lava is too thick to flow a great distance so rises directly over the vent to form a dome.   She is a beauty and can be seen from many vantage points throughout the park.

May 22, 2015 marked the centennial of the Lassen Peak eruption, a cataclysmic event that blew a cloud of ash almost six miles into the atmosphere. Volcanic ash rained down over 200 miles to the east and boulders weighing as much as 300 tons were carried five miles from the peak. This explosion set the stage for establishing Lassen Volcanic National Park in August 1916.

Seismologists continue to study volcanic activity within the park. Earthscope, a plate boundary observatory station, is part of a network of over 875 stations installed across the western U.S. to study movement of the Earth’s crust.

We stayed at Manzanita Lake in the northwestern part of the park, the only open campground when we arrived on Memorial Day. Lassen is one of the lesser-visited National Parks, possibly because it is a bit “off the beaten path”. With so much beauty and so much to offer, we found ourselves wishing for more time. A return trip is in order, as we felt we had only scratched the surface in 4 days.

Here is what we were able to squeeze into our short visit:

1) Manzanita Lake Trail – a tranquil 2-mile trail that is a must at sunset. Go at various times of the day and you will find something new at each visit.

2) Manzanita Creek Trail – a 7-mile obstacle course of fallen logs across the trail, caused by a severe windstorm earlier in the year. This was a ranger recommendation but the only positive for us was that it could be done from the campground.

3) Summit Lake Trail – The entire trail is an ~ 11-mile loop, with lots of crystal blue lakes. We did 7.5 miles to Lower Twin Lake, which brought us past four of them. We would have liked to complete the entire loop but Terry had taken a nasty fall a few nights before and did a fine job bruising his ribs. It seems climbing over downed logs on the trail wasn’t helping them much. 😉 Needless to say I had to hike on my own for the rest of our stay in Lassen.

4) Kings Creek Falls Trail – a 3-mile trail down to a large waterfall. The foot trail was closed due to poor trail conditions so partway into the hike you were diverted to the horse trail, a steep rocky descent down to the falls. This hike had great views of Lassen Peak and the falls were quite lovely.

In the foreground of Brokeoff Mtn.

A few items on our list that will have to wait for another visit:

Lassen Volcanic National Park has a quiet calm to it when you gaze upon its stately pines, jagged peaks still swaddled in deep blankets of snow, and crystal lakes. Yet far below the surface a fire still burns, evidenced by the hissing steam vents, bubbling mudpots and boiling springs dotting the landscape, symbols of nature’s powerful forces and diverse beauty.

55 thoughts on “Of Fire and Ice ~ Lassen Volcanic National Park” 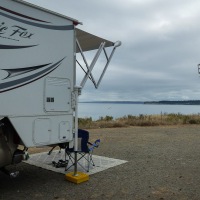 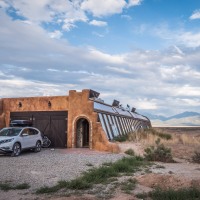 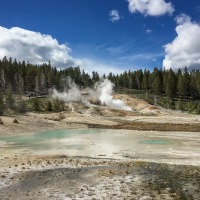