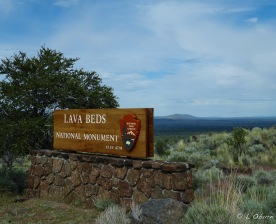 Our last stop in California, Lava Beds National Monument, lies at the remote northern end of the massive Medicine Lake Volcano. During the past half-million years this shield volcano has erupted many times, spewing gas and lava, creating an otherworldly landscape. It is still considered tectonically active, having last erupted ~ 950 years ago. Today you can explore the resulting geologic features – lava tubes, spatter cones, and surface lava flows. The caves were created by lava flowing 10,500 to 65,000 years ago.

Lava Bed’s historic turbulent past mimics its geologic turmoil. Early Euro-American settlers uprooted the peaceful Modoc tribe who lived on this land, forcing their move to the Klamath Indian Reservation, yet another sad time in the history of our nation. Modoc leader Kientpoos, better known as Caption Jack, came back to the reservation with a band of 150 men, women, and children, determined to take back their sacred homeland.   The resulting tension between the Modocs and the settlers brought about the Modoc War of 1872-1873. 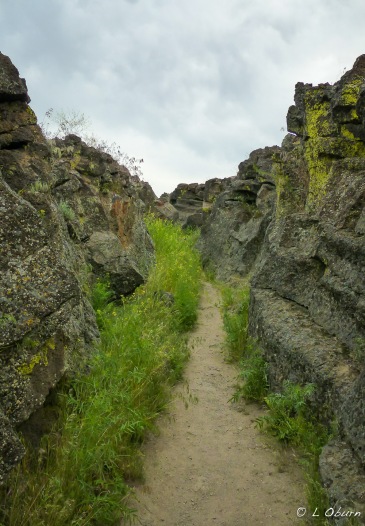 The natural fortress where the Modocs retreated, known as Captain Jack’s Stronghold, remains today, a tribute to the fortitude of 60 warriors who held off a much larger army force for five months.

There are over 500 lava tube caves in Lava Beds National Monument, the highest concentration in the U.S. These tubes formed when the outer edges of lava flows began to cool, eventually creating a roof, much like surface ice on a flowing river. If multiple flows followed one channel, lava tubes were created atop one another, like stacked pipes. When the ceiling collapsed from its own weight, access was opened to the caves below. Twenty of the 500 lava tube caves are considered developed, with forged paths through them, ready to explore, rated from least challenging to most challenging.

We have been in many caves during our travels, Kartchner and Carlsbad, to name a couple. I have enjoyed them immensely but they had a few items that were missing in the Lava Bed’s caves, namely large-domed chambers, smooth walking surfaces, lighting and a ranger to show me the way.   For someone who is claustrophobic, this was going to be a challenge.

Heading down into Labyrinth Cave

The lava caves are important habitats for 14 different species of insect-eating bats. In the summer female bats raise their pups in maternity colonies and in winter the caves become refuges for hibernating bats. Other critters slithering through the caves, which I tried not to think about when we were inside, are cave crickets, millipedes, and rubber boas, yet another reason for me not to explore the most challenging caves on my hands and knees.

Many of the caves, no matter the temperature above ground, remain at a cool 55°F. Some exhale frosty breaths that stay below freezing, with year-round skating rinks on their floors.

The Visitor Center recommendation for number of light sources in the caves is three flashlights per person. Perhaps this is more for those phobic-souls who would have a complete meltdown should they have a light malfunction. We carried three total, two that we rented from the Visitor Center and one of our own.

Closed-toed shoes, long pants and a hard hat were also suggested. We passed on the purchase of the hard hats and opted for ball caps instead since I didn’t see the need for hard hats in our future. But, if you bang your head on a low-hanging ceiling, as I did, you might begin to think that a hard hat would be a nice prop to have when you have a yearning to belt out ‘YMCA’. 😉

We explored six caves in the least to moderately challenging categories and poked our head into another in the most challenging. Sentinel Cave, 3280′ in length, was the longest 30-minutes of my life and deathly quiet, with only my occasional outbursts of “I don’t know if I can do this” spoken into the black void. 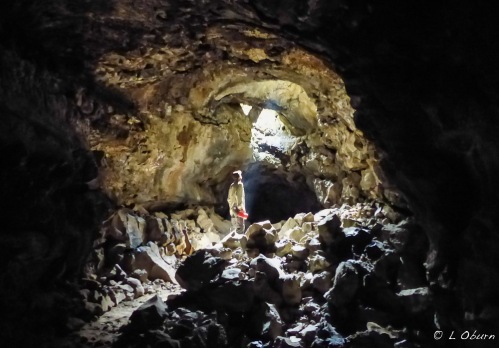 Golden Dome was the most interesting, with beautiful colors reflecting off water droplets that beaded up on a coating of hydrophobic bacteria. This cave can also be a bit disconcerting as you encounter a figure-8 that could keep you walking in circles if you didn’t pay close attention. 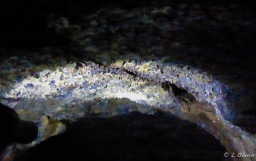 So, would I venture into these caves again?  Surprisingly, yes I would, if you didn’t ask me to do it on my hands and knees. 😉  If you like cold, damp, dark places where the only sounds are the occasional dripping water and your own raspy breaths, this might be something you too would enjoy. It it really pretty awesome when you think about how these unusual caves were formed.

47 thoughts on “A Turbulent Past ~ Lava Beds National Monument”