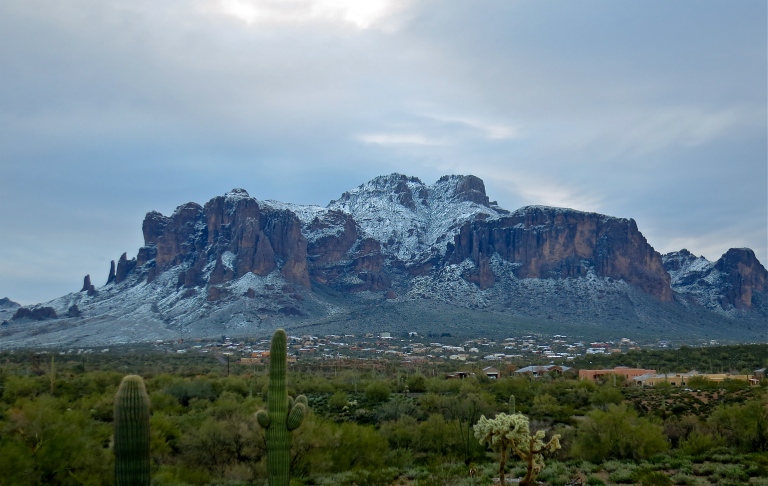 Our hike into the Superstition Mountains took us in search of a needle, Weaver’s Needle to be exact.   There are several hikes in this wilderness area that allow for views of this well-known landmark (and the Needle presents differently depending on the angle), but the Terrapin Trail we chose gets you closer than most.  The entire hike is a 13-mile loop that circumnavigates Weaver’s Needle but we weren’t able to start early enough to do the entire hike so we opted instead for an 8-mile out and back.  This actually was just about perfect, given the section we trekked was fairly aggressive, over rough terrain, and required some boulder-hopping.  We threw in a little bushwhacking just for fun so we could enjoy lunch gazing at Weaver’s Needle.  If you long for isolation while hiking, this trail is far superior, in our opinion, to the Peralta Trail, one of the most heavily traveled in Arizona.

Weaver’s Needle was named after mountain man Paulino Weaver and was formed from the erosion of fused volcanic ash.  It has played a major role in the stories told of the Lost Dutchman’s Gold Mine. Supposedly the Needle’s shadow points to the location of a significant vein of gold.  Many have searched for the Lost Dutchman’s Gold and some have lost their lives in this pursuit.  There are even those who feel that the Dutchman mine doesn’t exist within these mountains at all.

The Superstitions are not kind to those who don’t respect her and the wilderness is rugged and vast, with  many trails not well-marked.  If not careful, you could easily get yourself turned around and never leave.  The stories are endless of those who have disappeared, with some estimates of over 600 deaths or disappearances.  Earlier this week on the local news we heard of a 51-year old woman who had to be rescued from the Superstition Wilderness and this was not a first for her but has occurred many times during her quest for the Lost Dutchman’s Mine, the last rescue as recent as December 2012.

Lots of running water in the canyon due to snow melt

Terry getting his bearings at the trailhead 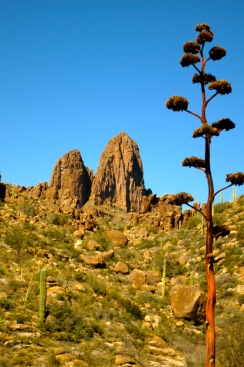 First view of Weaver’s Needle from the trail, with century plant standing guard 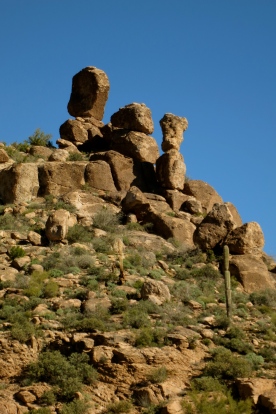 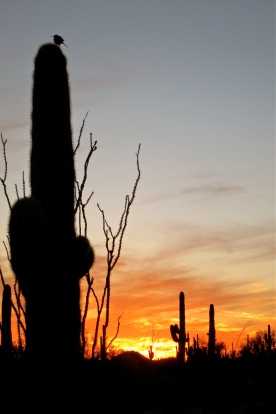 Many feel there is a curse in this desolate wilderness.  The fantastic tales of strange phenomena involving the Superstitions are lengthy and quite bizarre, from Aztecs still holed up in caves, to UFO sightings, to portals into other worlds. Strange coincidences swirl around these mountains as well.  Stone from the Superstitions was used to build the Roosevelt Dam on the Apache Trail and 22 died in the construction.  The first water that came over the dam was saved and used to christen the famous battleship USS Arizona.  Twenty-five years later this same battleship became known as the most devastating loss in the attack on Pearl Harbor, with more than 1000 men going down with the ship.

Wicked accidents are a common occurrence as well, as my husband can attest to. Some years ago, while hiking down a rocky trail out here, he stumbled and fell into a teddy bear cholla forest.  Neither he nor the teddies fared very well in this encounter.  Lots of blood and a few tears were shed (mine) as I pulled hundreds of barbs out of his body.  Luckily his face was unscathed, but the palms of his hands took the brunt, along with a shoulder, stomach, and hip.  For weeks afterwards, the teddy bears enacted their revenge on him in the form of secondary barbs that continued to surface in the palms of his hands.  Guess they didn’t take too kindly to him tearing away their appendages in his rush to greet them!

The Superstition Wilderness is fiercely rugged country and a fabulous place to hike in pure isolation, provided you watch the signs and follow those stacked rocks (cairns), which could literally save your life or prevent a rescue mission.

58 thoughts on “In Search of the Proverbial Needle ~ Superstition Mountains, Apache Junction, AZ” 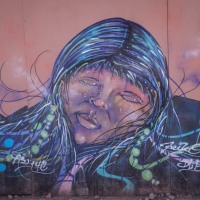 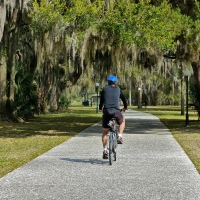