“There are no words that can tell the hidden spirit of the wilderness, that can reveal its mystery, its melancholy and its charm.”  ~  Theodore Roosevelt

Theodore Roosevelt National Park, named after our 26th President of the same name, lies in western North Dakota.  Part of Teddy’s spirit may still roam here, given his love for this land, for it was his time spent here that played an instrumental role in his development of conservation policies that remain in place today.

The Lakota people were the first to call this territory the “badlands” due to lack of water, extreme temperatures, and the rugged terrain.  Teddy Roosevelt first came to the North Dakota Badlands in September 1883 to hunt bison and was enchanted by its desolate, melancholy beauty.  It was the death of his beloved wife Alice Lee, due to complications from childbirth, and mother Mittie, who succumbed to typhoid fever, both in the same house, on the same day, February 14, 1884, hours apart, that brought Roosevelt back to these lands, heartbroken and seeking nature’s healing powers.

We entered the gateway town of Medora on a hot, muggy day so we chose the 36-mile scenic drive of the South Unit over hiking that first afternoon.  After spending much time in similar parks, such as Yellowstone and Yosemite, this park (imho) paled in comparison.  But the expression “don’t judge a book by its cover” applies here, as in digging a little deeper I have found some hidden gems.  But before I get to the good stuff, I’ll share a bit of a saga that’s been going on behind the scenes here.

Unfortunately the day of our arrival we learned just how much Terry’s father’s health had deteriorated over the past few days.  We both felt it imperative that Terry head to Ohio now instead of wait until the 25th of this month as he had planned.  What to do about an airport and flight was the next question, as we are in the middle of nowhere. The closest “big” town to us is Dickinson, 40 miles away, but surprisingly learned they have an airport another 7 miles outside of town.  So with flight booked and bags packed, we headed for the airport the next day, a very rainy day at that.

With Terry safely at the airport, I headed back to the park.  As I approached Dickinson a message scrolled across my dashboard stating STOP SAFELY NOW, and within seconds the truck decided to stop me.  There I sat in the driving rain blocking traffic, which never makes for happy drivers. With Terry at the airport contacting Ford and a tow service, I directed traffic while drivers scowled at me through rain-streaked windows.

Fast forward and an easy fix soon became anything but as the sensor broke while being removed so now we are awaiting parts and dealing with a warranty company that has been less than cooperative.

Many hours later, in a rental car headed back to the park, the skies opened and I found myself wishing for an ark.  Suffice to say the drive back at 40 mph was the longest 1.5 hours I have spent in some time.  I later learned that we had received 6-8″ of rain in a matter of two hours, which is probably why I felt I floated home most of the way.  But Terry is where he needs to be and I arrived safely.

The silver lining in this ongoing saga was a visit from dear Colorado friends Stan and Marilyn.  For two days we enjoyed great conversation, lots of laughs, and a lovely hike. They agreed to a hike I really wanted to do in the remote northwest corner of the south unit, the Petrified Forest Loop Trail. I was determined to hike it solo or with friends but agreed that it is probably best done with others, especially if the solo woman is somewhat directionally challenged. 😉  The petrified forest, hard sandstone spires topped with caprocks, and dodging bison during their rut made for an interesting hike. 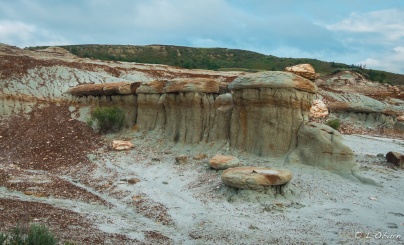 We rounded out our time together with a stroll through Medora and a lovely dinner at Theodore’s, which we all highly recommend.   The food was excellent and the company, of course, priceless.  I can’t thank them enough for brightening up my week.  We look forward to seeing them again soon in Colorado.

Next up:  More hiking, prairie dog towns and concretions, my favorite! 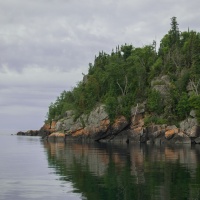