Since our travels down Hwy 395 in the fall of 2012 we have reminisced and daydreamed about following this route north again in the spring. What better time than when planning a trip to the Northwest.

A drive up the 395 is not complete without a stop in Lone Pine, where, when you lay eyes upon the uniquely stacked boulders of the Alabama Hills, you are immediately drawn back to the wild west.  For those like me who think that this is an unusual name for a California landmark, the explanation lies with the old prospectors who staked claims in the hills.  It seems they were sympathetic to the Confederate cause and named their mining claims after the C.S.S. Alabama, a Confederate warship that wreaked havoc during the Civil War.  The name eventually stuck.

Gazing out over this barren, sagebrush dotted landscape, it is easy to envision a “shoot-‘em-out” scene from back in the day. Since 1920 there have been 400 movies filmed here. Movie stars such as Tom Mix, Gene Autry, and The Lone Ranger hunted down outlaws in these hills and more recently Star Trek Generations, Iron Man, and Django Unchained were filmed in the Hills.  A great little movie museum in Lone Pine carries memorabilia from these movies.

Our interest goes beyond the many movie sets you can check off on your drive through the Alabama Hills. Standing in stark contrast to the rounded, oddly shaped boulders are the glacially chiseled Sierra Nevada mountain range and there is no finer backdrop for exploring the myriad trails that snake through these parts.

Although the Alabama Hills and Sierra Nevada Mountains could not look more dissimilar, they are composed of a similar granite rock uplifted about 100 million years ago. The Hills were subjected to a different type of erosion known as “chemical weathering”, scientists believe at a time when the region was moist and the hills were covered in soil. 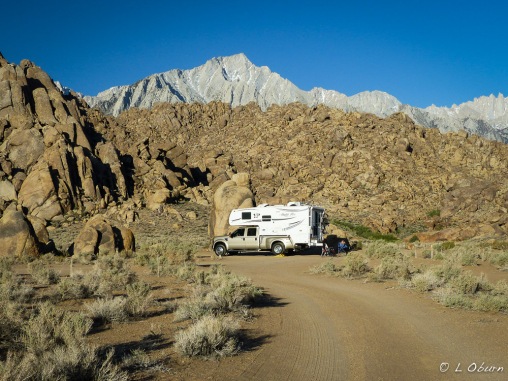 Our sweet campsite overlooking Mt. Whitney and the White Mtns.

Sun breaking through the clouds 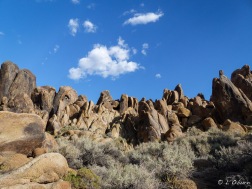 Rugged landscape of the Alabama Hills

Pulling into Tuttle Creek Campground just outside the Hills, we saw big signs reading “WWW”. Thinking there may be no availability due to the arrival of a large group, we were pleasantly surprised to find a few empty sites. We soon learned that “WWW” stood for Wild Wild West Marathon and Ultra, held the first Saturday of May, weaving through the Alabama Hills and the Mt. Whitney foothills. All three races, a 10-miler, marathon, and 50k began at the campground, a rugged course run in sandy soil, up and down long grades, in 80 degree temps, on a blustery day. Made our day seem like a walk in the park.

As a prelude to hiking again at high altitude, we ventured out from the Tuttle Creek Campground where we camped, over to the Arch trailhead at Alabama Hills.  This is home to the famous Mobius Arch that countless photographers have used to frame photos of Mt. Whitney, highest peak in the lower 48 states at 14,500’.  From there we ventured out onto the trails in search of more arches, but eventually the wind gusts and blowing sand drove us back to the campground.  We clocked 11 miles and Terry is now thinking he might have a drill sergeant for a wife like someone else we know. 😉

Note: For those interested in “arch scouting”, there are over 200 arches in the Alabama Hills, although many remain elusive and unnamed. You can read more about them here. 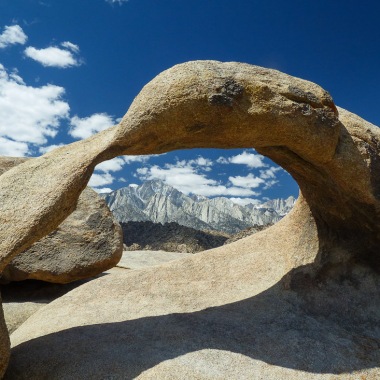 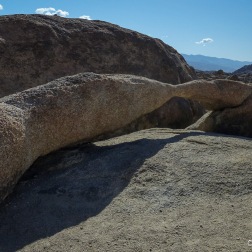 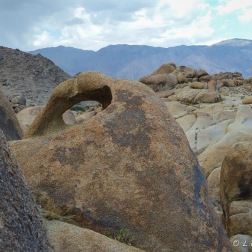 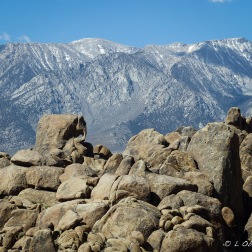 From Tuttle Creek our plans were to camp at the Whitney Portal Campground, sitting at the base of Mt. Whitney but the Ranger at the Visitor Center discouraged us with weather reports that sounded less than promising for high altitude hikes.   And they had not received word that the Whitney Portal campground had opened, most likely because of the projected storms.  Since we had done the Whitney Portal Trail in the fall, we opted for Plan B, heading for the hills, where we spent the next two days bouldering and hiking the myriad trails that snake through the rocky outcroppings.  I was on the lookout for arches, but most remained hidden from view. 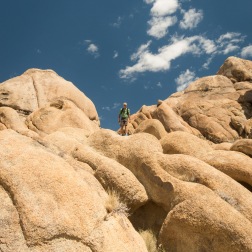 Terry getting into bouldering

Etching found along the trail 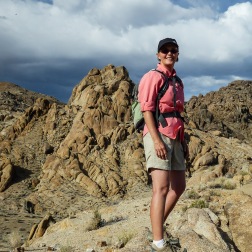 Me getting up high! 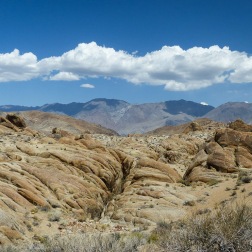 View of the White Mtns from our campsite 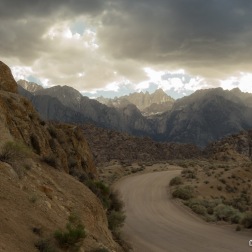 Stormy day in the hills 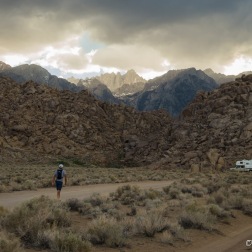 Heading home before the storm hits

The best part of our stay was the campsite, with views out our windows of Mt. Whitney and the White Mountains…sweet!  Reverently gazing up at this jagged mountain, I had a sense that the same cool breeze caressing our faces has just rolled down the face of the mountain from high above. Yep, this crazy, otherworldly landscape has a hold on us and we will be back.

80 thoughts on “Back to the Wild West ~ Alabama Hills” 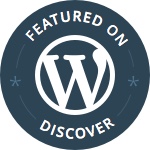 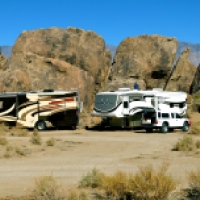