Point Reyes National Seashore is a peninsula of much – treacherous headlands, stunning coastline, impenetrable fog, howling winds, lush forests, wind-blown hillsides, historic dairy farms, mammals and birds galore, and a lighthouse, which to be seen up-close will certainly give your legs and lungs a workout.  It is the windiest place on the Pacific coast and the second foggiest place in North America.

We had been to Point Reyes before but not during the summer.  Our first visit, we recalled, was on a very blustery, foggy day and we seemed to be the only two around, with both visitor center and lighthouse locked up tight.  Thankfully the gods were smiling on us for our second visit, rewarding us with sunshine and mild breezes.

The peninsula’s land mass covers ~71,000 acres, with many hiking trails, three visitor centers and some funky little towns begging to be explored.   While we did spend some time in Point Reyes Station (more about that later), our focus was to get to the lighthouse while the sun was still shining.

This year marks the 50th anniversary  that Point Reyes National Seashore has been in the National  Park Service system.  Established relatively recently on September 13, 1962 by President John F. Kennedy, her history extends back thousands of years, with the first inhabitants being the Coast Miwok Indians roughly 5000 years ago.  Being hunter-gatherers, theirs was a good life here, with both land and sea offering up her bounties to this peaceful people for thousands of years.

A long and rich maritime history is the story of Point Reyes.  Spanish explorers navigated these waters with their treasures from the Orient, while gold miners, lumbermen, and dairy farmers relied on the transport of their goods through these straits.  Historic dairy farms, still operating today, dot the roadside leading out to the lighthouse.

Point Reyes Lighthouse had her debut on December 1, 1870, as a result of many shipwrecks in these coastal waters, the first in California history being that of the San Augustin, a Spanish galleon.  Her fate of a watery grave took place in 1595, off of Drakes Bay, but was only the first in a long line of such tragedies.  This lighthouse guided mariners for 105 years, until 1975, but unfortunately ships continued to have fateful endings despite all efforts.  All total, 50 ships have been lost at sea here, due to the treacherous cliffs, howling winds, and dense fog.  Even today, nearly every year a small vessel meets a tragic end on this rugged shoreline.  Jutting 10 miles out to sea, Point Reyes Headlands pose a serious threat to ships entering and leaving the San Francisco Bay.

Although the lighthouse itself is no longer working, a fog signal is still sounded and an automated light replaced the original “first order” Fresnel lens that still sits in the lighthouse.  The National Park Service is now responsible for the maintenance of the lighthouse and if you are lucky, as we were, an NPS employee may be there to give you some history on this magnificent light.

Much to our delight an immature gray whale spouted off the shoreline, highly unusual for this time of year.  They have normally made their migration south by this time.  Other great animal sightings, we are told, are the elephant seals to be seen just north of the point and the Tule elk, endemic only to California, at Tomales Bay.

Time to migrate north, as in hoof it up the 300+ steps back to the roadway, as the fog is now settling  in for the night at Point Reyes National Seashore. 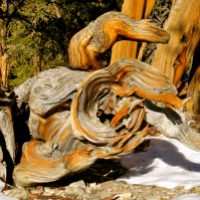 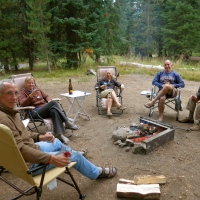 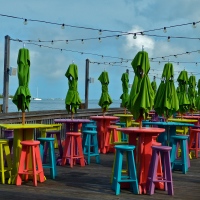