Destination Joshua Tree National Park and with the Salton Sea on the way, a picnic lunch seemed like a good idea.  The Salton Sea is one of the world’s largest inland seas, a shallow closed drainage system with no flow out to rivers or oceans.  Any loss of water is caused by ground seepage or evaporation only. Some of the largest lakes in the world are of this type I have learned, such as the Caspian Sea, the world’s largest.

Sitting 226′ below sea level, directly on the San Andreas Fault, this waterway is 35 miles long and 15 miles wide, which gives it the title of largest lake in California. It was created by a flood in 1905 and has greater salinity levels than that of the Pacific Ocean.  This is a very important wetland area with over 400 species of birds identified and several million taking this “bird highway” from Alaska to South America annually.

The desert pupfish, who lived here thousands of years ago when mammoths, camels and sloths roamed this land still survive today, although far fewer.  He is a tenacious little fella (2″ in length) thriving in both salt and fresh water, hot or icy cold water, and can easily adjust to wide swings in oxygen levels.  Who else is so adaptable?  Certainly not me.

Boondocking is available at Salton Sea State Recreation Area lakeside but be forewarned, your experience could change based on the direction the wind is blowing.  There were many fish carcasses (tilapia I believe) strewn along the banks where we lunched, a testament to the gluttony of the visiting birds or the rising salinity level of the water?  However, with the lake and several mountain ranges as your backdrop, perhaps some things can be overlooked.

Joshua Tree National Park was to be our last stop of the day before heading back to the beach.  These 790,000+ acres of desert in southeastern California were declared a National Park in 1994, much of them still wilderness area.

Vast geologic changes can be seen as you drive through the park – wide open vistas, stands of some of the tallest Joshua trees anywhere, and large rock outcroppings that make the landscape look otherworldly or as if a giant was stacking up large piles of marbles.  It is a rock climbers’ paradise, one of the most popular in the world, with ~ 5000 routes to choose from, many for experienced climbers only.

Joshua Tree National Park was named after its namesake tree, which is a member of the agave family.  Legend has it that Mormon immigrants named this tree after the biblical figure Joshua, seeing the limbs outstretched as if in prayer.  The largest Joshua tree in the park is over 300 years old and 40 feet tall.

Spring rains bring large clusters of whitish-green flowers to the branch tips of he Joshua tree.  Given the less than average rainfall this year, the trees are just beginning to bloom, along with the spiny ocotillo, one of my favorites.  As with many things in life, timing is everything and I think we were just a wee bit ahead of the spring colors.  So it’s back to San Diego where colors seem to abound no matter the time of year.

Leave a Reply to Paint Your Landscape Cancel reply 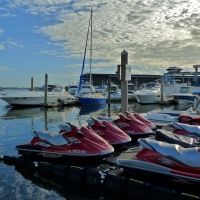