Memorial Day, a federal holiday established after the Civil War, is a day we honor the service, sacrifice, and immeasurable courage of all those Americans who lost their lives while in military service.  This month, 150 years ago, the first military burial took place at Arlington National Cemetery. Although we knew there would be throngs of people visiting this weekend, and there were, we felt compelled to walk these hallowed grounds, to honor the fallen and their selfless service.

As we entered the visitor center, packed with those here to pay their respects, we knew we would need to return at a later date to take in the exhibits at a much more leisurely pace.

Beyond the doors of the visitor center, rolling verdant hills, dotted with countless white headstones adorned with small American flags, grace the landscape.  More than 400,000 active-duty, veterans, and their families lie beneath these grassy slopes, a profoundly beautiful and peaceful final resting place.   Immaculate gardens with trees hundreds of years old pay tribute to those who sacrificed everything. 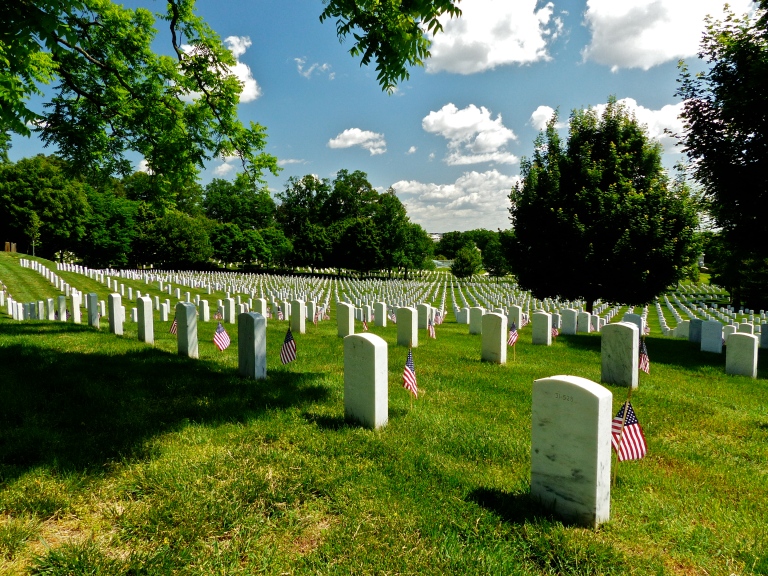 On any given weekday, as many as 30 funeral services are performed at Arlington.  As we walked along one of the many paths winding through the gardens, a somber sight met our eyes, servicemen marching in unison, followed by a horse-drawn caisson carrying a flag-draped casket.  A riderless horse slowly walked behind, one lone boot strapped to the saddle.  The sense of loss was felt as the funeral procession passed by. Three rifle volleys and the mournful sound of a lone bugler playing Taps accompanied the service. 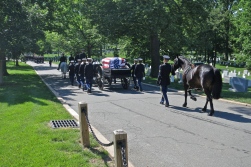 The Tomb of the Unknowns sits high on a hill overlooking Washington DC, one of the most well-attended sites within Arlington.  Within this crypt lie the remains of unknown servicemen from World War I, II, and the Korean War.  Soldiers from the 3rd U. S. Infantry Regiment (The Old Guard) maintain a 24-hour, 365-day long vigil, with an elaborate ritual changing the guard taking place every 30 minutes.  The poor lighting conditions and the throngs of visitors made it impossible to get good photos but I was thankful to witness this memorable ceremony. 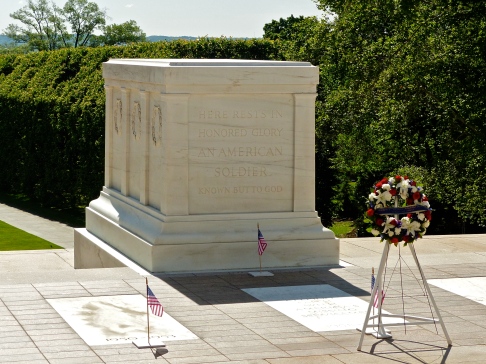 Rising above the Potomac River on a lush hillside stands the impressive Arlington House, where Robert E. Lee and wife lived out their years caring for her family home. Standing outside the front door you look out over the Washington Monument and the Capitol and at the base of this grassy hilltop the Eternal Flame flickers, site where President John F. Kennedy was laid to rest, one of only two Presidents interred at Arlington.  Many thought the family plot in Massachusetts would be the burial site but First Lady Jacqueline Kennedy felt “he belongs to the people” so Arlington was chosen, and the lovely Jacqueline is buried at his side. 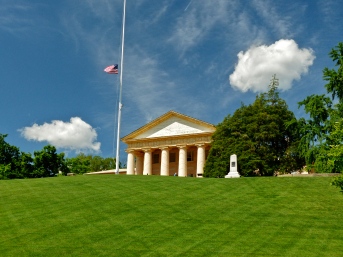 On this most somber of holidays, we remember the fallen and our thoughts go out to the loved ones who live with the gravity of their loss. 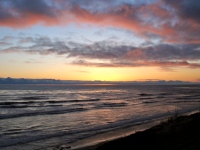 One last walk on the beach on the busy Memorial Day Weekend, marking the first of summer for families .  The weather was divine!

One last Eli Howard Surf School class to watch – beginner surfer dudes (kooks)!  Wish I could capture the look of excitement on the kids’ faces when they catch their first wave!

This was going to read one last strawberry balsamic gelato from Chuao Chocolatier, and it is amazing, but we decided to get a little crazy and go to Blue Ribbon Artisan Pizzeria and have something we have not had in months, a pizza.  We walked away remorseful that we had not found this place earlier in our stay, everything was that good, all local ingredients and made on site.  When we walked in we said that it reminded us of a quaint little pizzeria in downtown Phoenix and later learned from our waitress that it was modeled after that very same restaurant.  The pizza was one of the best we ever had; the Eel River craft porter was delish;  and we were talked into staying for dessert, so no gelato, but the award-winning dessert we had was divine.

I am not a fan of butterscotch pudding (Terry loves it) but I must admit that the addition of some malted sea salt in this decadent dessert made it, well, heavenly.

One last view of the ‘Unconditional Surrender’ sculpture at the San Diego Harbor, depicting a sailor kissing a nurse to mark the end of World War II.

One last visit with the terrific young men and women Park Aides at San Elijo.

One last walk through the meditation gardens.

Today wraps up our first workamping experience and what a great first it was!  A big shout-out to the wonderful staff at San Elijo State Beach.  We could not have asked for a greater group of people to work with and our Camp Host teammates were a delight as well.   Tomorrow we hit the road again, to spend time at some of the National Parks in northern California, to reconnect with nature until time for Terry’s medical tests later this summer.

Lots of memories for us in San Diego and a great way to spend part of a winter and spring.  Today is the one last day to say goodbye to the staff and campers and breathe in the salty air at San Elijo State Beach, that is until we return later this year.

With Memorial Day rapidly approaching, it seems a fitting time to say a few words about our visit to Fort Rosecrans National Cemetery, 77 acres of serene resting place for ~ 72,000 veterans and their family. This is one of 120 national cemeteries, one which could not have a more breathtaking backdrop, that being San Diego Bay, the Submarine Base, and the city.  The stark white marble headstones dotting the rolling hillsides drew us in and we were humbled by the experience.

This national cemetery dates back to the mid-1800’s, with some of the first to be interred here as a result of the Battle of San Pasqual, which occurred during the Mexican-American War in December of 1846.  It became an Army Post Cemetery in the 1860’s, a National Cemetery in 1934, and was placed under the auspices of the Veteran’s Administration National Cemetery System in 1973.  Fort Rosecrans has been closed to in-ground burials since 1966 but space is still available for cremated remains.

Memorial Day, known quite often as the kickoff to summer, ending a long school session for many, was the day initially set aside to honor all the men and women who gave the ultimate sacrifice to keep this land of ours free.  It is the day that we remember not only those serving our country in the Armed Forces now but all  who bravely fought.  One of San Diego’s largest celebrations is held on Memorial Day at Fort Rosecrans National Cemetery, a most serene resting place. 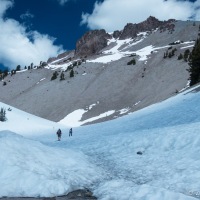