According to the Lakota tribe, while at play, a group of young girls were chased by giant bears. Their escape was to climb atop a rock and pray to the Great Spirit to save them.The Great Spirit heard their pleas and the rock rose to the heavens, keeping the young girls safe from attack.  Deep claw marks in the sides of the rock evidence the ursine’s attempts to reach the girls. These are the marks which appear today on the sides of Devils Tower.  When the girls reached the sky, they were turned into the star constellation Pleiades.

There are things in the natural world that induce a stillness of spirit, a sense of wonder. For me, Devils Tower is one of those things.  President Theodore Roosevelt must have felt this same sense of awe as he gazed upwards at this rocky sentinel rising 1267 feet above the surrounding landscape, as this was to be his choice for the first national monument on September 24, 1906.  With a one-mile circumference, it is a sight to behold.

Silent elegance on a cloudy day

The name “Bear’s Lodge” given to this stately tower by Native Americans became woefully mistranslated by a U.S. Army interpreter to that of “Bad Man’s Tower”, which then became Devils Tower.  Northern Plains Indians have objected to this name and wish to see it changed to Bear Lodge National Historic Landmark but they have been met by local opposition, fearing a name change would affect tourism.

There is an ongoing debate about how this massive tower was formed.  Most geologists agree that Devils Tower was formed by the forceful passage of molten material between other rock formations but they can’t agree whether this magma reached the earth’s surface or how that process took place.  What is known is that this material cooled and crystallized, forming hexagonal (4 to 7-sided) columns separated by vertical fissures, compatible to columns found at Devil’s Postpile National Monument in California, but those at Devils Tower are much larger.  These are the tallest and widest columns in the world, some more than 600 feet tall and 10-20 feet wide.

View from our campground 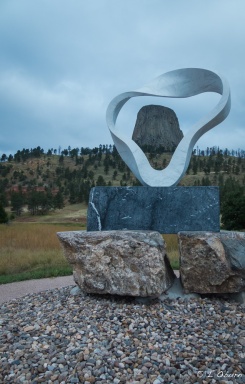 ‘Circle of Sacred Smoke’ designed by Japanese sculptor Junkyu Muto, representing the first puff of smoke from the pipe used by Native Americans to pray.

Many ask, “should this be a sacred tower, a climbing mecca, or is there room for both?” It has long been held as sacred ground by over 20 Native American tribes but has also been sought as an international climbing destination since its first ascent on July 4, 1893.  Out of respect for Native American beliefs, the National Park Service has asked climbers to refrain from climbing the tower during the month of June, when many tribes gather here for prayer, sun dance, sweat lodge ceremonies, and vision quests.

Records of the tower climbs have been kept since that first ascent by William Rogers and Willard Ripley in 1893, using a wooden ladder to climb the first 350 feet.  Two years later Mrs. Rogers used that same ladder to become the first woman to summit. Remnants of that ladder can still be seen today on the side of Devils Tower.  Annually 5000+ climbers world-wide come to tackle this technically difficult tower and over 220 climbing routes have been established.  Five deaths have resulted from attempting this climb, the most recent being in 2003.  We watched in awe as one climber worked his way up the tower barefoot. 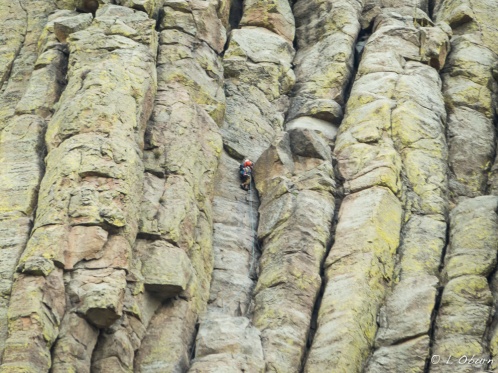 Climber tackling yet another route

We were content to extol her beauty with our feet planted terra firma. 🙂 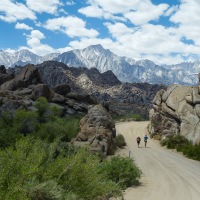 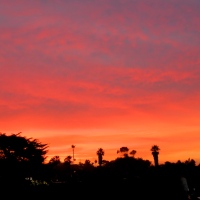