There is a dramatic stretch of highway that parallels the Continental Divide, melding together two stunning Canadian parks.  This two-lane highway, stretching from the picturesque little village of Lake Louise in Banff National Park to the vibrant little town of Jasper in Jasper National Park, has been rated as one of the top drives in the world by Condé Nast Traveler, 144 miles of soaring rocky mountain peaks, ancient glacier ice fields, and immense sweeping valleys.  I would not be classified a worldly traveler (more a wannabe) but I must agree that it is tops on my list.

This is more than a drive.  It’s a journey through natural history, jaw-dropping landscapes, and more than 100 ancient glaciers.  It is so much larger than my meager brain can wrap itself around.  The best way to describe the beauty of the Icefields Parkway is through photos.  Here are just a few of the dramatic sights seen along this winding stretch of road:

Herbert Lake, sitting under the peak of Mt. Tempe, was our first stop of the day after leaving Lake Louise.  Its morning reflection was a great start to our day.

Bow Glacier and Bow Falls , one of the many striking glaciers along this beautiful stretch of highway.

Peyto Lake, named for “Wild Bill” Peyto, one of the first game wardens in the park.  The unusually bright blue water of the lake, created by glacial “rock flour”, which scatters the blue-green rays of light, coupled with the wide view of the Mistaya Valley, make this one of the most scenic sights along the parkway.

Another glacier seen from Hilda Pass.

And another from the Sunwapta Pass.

The Columbia Icefield, composed of eight glaciers and encompassing an area of about 200 miles, sits near the halfway mark on the Icefields Parkway.  This ice mass is one of the largest south of the Arctic Circle and is one of the most reachable in North America.  The Athabasca, Snowdome, and Stutfield Glaciers can be seen from the parkway.

The Columbia Icefield Centre, much like a large National Park Visitor Center, is where you can book the Columbia Icefield Glacier Adventure, a 90-minute excursion onto the Athabasca Glacier aboard a massive Ice Explorer.  Tours on the Glacier Skywalk, a glass-floored observation walkway 918 feet above the spectacular Sunwapta Valley, can also be booked at the center.

Not unlike most other visitor centers, there is a 20-minute film that can be watched here.  We experienced “Through Ice and Time”, the best film I have ever seen in a National Park visitor center. 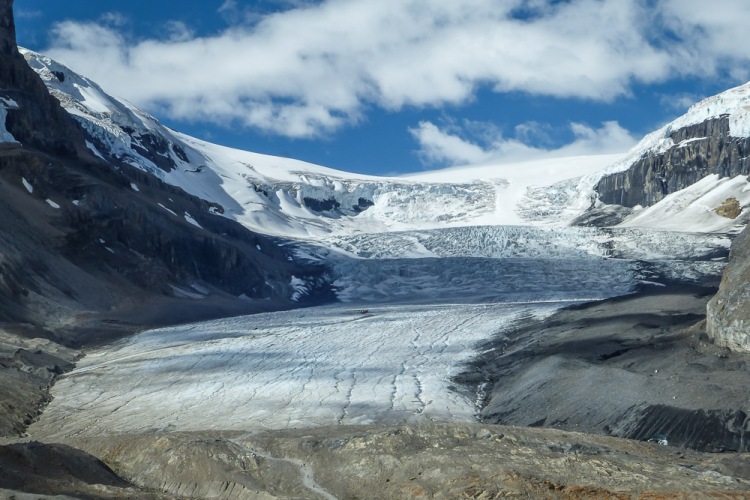 And the mother of them all, the Athabasca Glacier, largest in the Columbia Icefields, is the glacier the Ice Explorers drive visitors onto.  In 1844 this massive glacier covered the area across the street at the Columbia Icefield Centre, where the parking lot now sits, another testament to how far these glaciers have retreated. 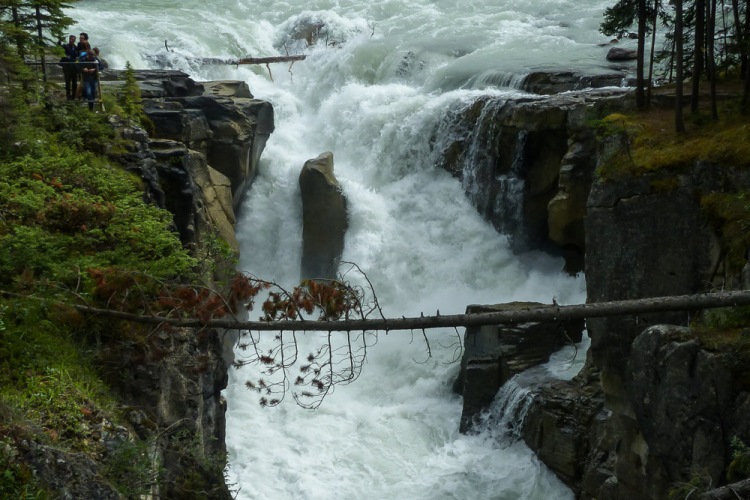 Thundering Sunwapta Falls, whose power can be felt and heard when you stand on the bridge above it. 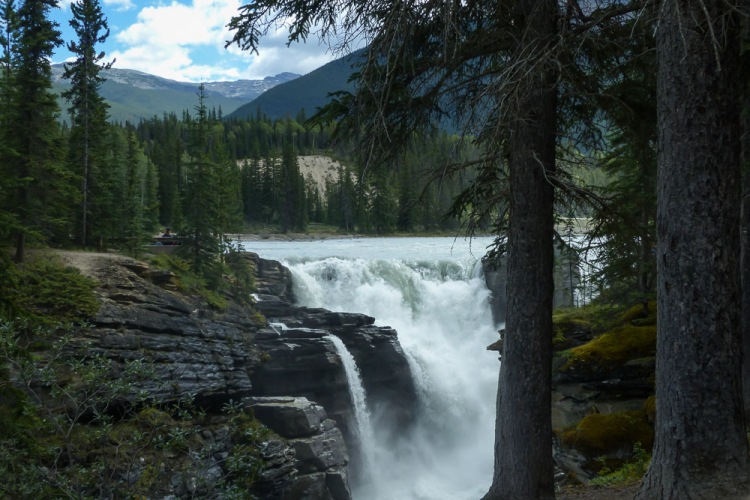 Mountain goats come down from the red cliffs of Mt. Kerkeslin to lick mineral deposits along the road.

A trip to the Canadian Rockies would be incomplete without experiencing this spectacular drive on the Icefields Parkway and the Columbia Icefields.  As we drove the winding roads, I was remembering a post I had recently read by blogger friend Sue, who had recently biked this route with hubby Dave and a group of other cyclists.  I bow down to you both. 🙂 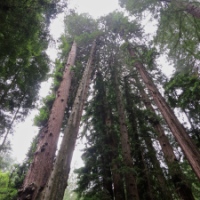