“…But for us there was no wilderness, nature was not dangerous but hospitable, not forbidding but friendly. Our faith sought the harmony of man with his surroundings; the other sought the dominance of surroundings.  For us, the world was full of beauty; for the other, it was a place to be endured until he went to another world.  But we were wise. We knew that man’s heart, away from nature, becomes hard.”  ~  Chief Luther Standing Bear

Neah Bay, home to the Makah Tribe, was to be our last stop on the Olympic Peninsula. Ancestral Makah were highly skilled mariners who traversed the treacherous waters of the Pacific with relative ease, and their tradition as fishermen remains today.  Wanting to learn more about this proud people, our first stop was the Makah Cultural and Research Center.

This small museum is recognized as our nation’s finest tribal museum, with a stately totem pole gracing the entrance, a full-size longhouse replicated, and four cedar dugout canoes displayed.  The finest artifacts are those extracted from an archeological dig in nearby Ozette.  This felt like sacred space to me, so it was not surprising that photography was prohibited.

Beginning in 1970 and continuing for 11 years, the Makah Tribe and Washington State University collaborated to recover over 55,000 artifacts from Ozette, a village just south of Neah Bay that once served as one of five year-round homes for the Makah.  A tragic mudslide changed all that in the early 20th century when a group of longhouses was entombed, preserving them and their contents for over 500 years.  This center is the sole repository for those findings.

The orientation film we watched included several interviews with local residents, whose passion for maintaining their ancestral traditions was clearly evident.  The last fully fluent Makah speaker died in 2002, but there are still elders who remember something of the language today, and young Makah are working to keep their ancestral language alive.  The center houses the Makah language program used in the schools still today to preserve and teach their native tongue.

For our short stay in Neah Bay we chose to camp at Hobuck Beach Resort, a no-frills campground that is nothing more than a grassy field for dry camping, but it serves its purpose.  The sound of the nearby beach lulled us to sleep at night. 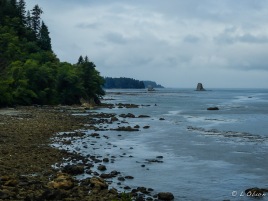 The next morning dawned clear, a perfect day I hoped for viewing Cape Flattery Lighthouse and the rugged coastline.  And if you are lucky, unlike us, puffins may be seen bobbing in the cold waters offshore.   A short hike through fern-draped forest brought us to the furthest northwestern edge of the lower 48, Cape Flattery, with sunny, unobstructed views of untamed coastline and a sole sentinel, Cape Flattery Lighthouse, sitting one-half mile off the cape on Tatoose Island.  First built in 1854 with a 65-foot tower, it is one of the oldest lighthouses in our nation and is now deactivated. Due to its archeological significance and a home for nesting birds, the Makah restrict access to the island.

After reading other blogger posts, I was determined not to leave Neah Bay without a stop at Take Home Fish Company, aka Kimm’s Place.  The thought of melt-in-your-mouth smoked salmon danced in my mind as we pulled up to the curb, kicking my salivary glands into high gear.  I could almost taste the buttery flesh.  But the greeting we received stopped me in my tracks.  They had just sold their last morsels. 😦  We had one more shot tomorrow for this delicacy.

Feeling a bit dejected, we settled instead for lunch at Linda’s Wood-Fired Kitchen, where Terry recognized one of the speakers from the film at the Makah Center the previous day.   He was one of the village artisans, a master at carving totem poles. 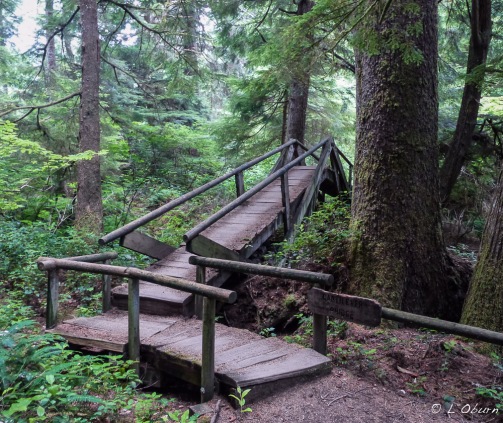 The marine layer was determined to join us the next morning as we prepared for our final hike on the Olympic Peninsula.  With swirling fog tendrils reaching out to us through the old-growth forest, we made our way to Shi Shi (pronounced ‘shy shy’) Beach.  An interesting 2-mile hike, with the use of ropes near the end, led to a sandy beach with tumbled sea stacks and roaring surf.  Lingering fog added a mysterious quality to the day.  We continued our hike another two miles down the beach to Point of Arches, where low tide provided views of ochre stars.  Normally we would have stayed longer to play in the tide pools but there was another treasure drawing us back to town.  I was not about to miss our window of opportunity at Kimm’s again. 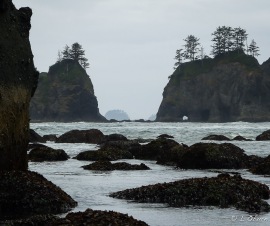 Pulling up to the ramshackle blue trailer for a second time, we found the salmon still in the smoker, but the proprietor took pity and pulled out everything that was ready. Oh my, this was by far the best salmon we had ever put into our mouths…a perfect ending to our time in Neah Bay.

Next Up: To the Islands 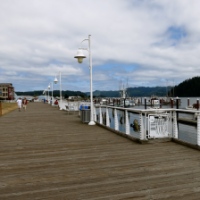 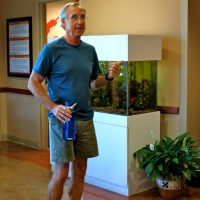